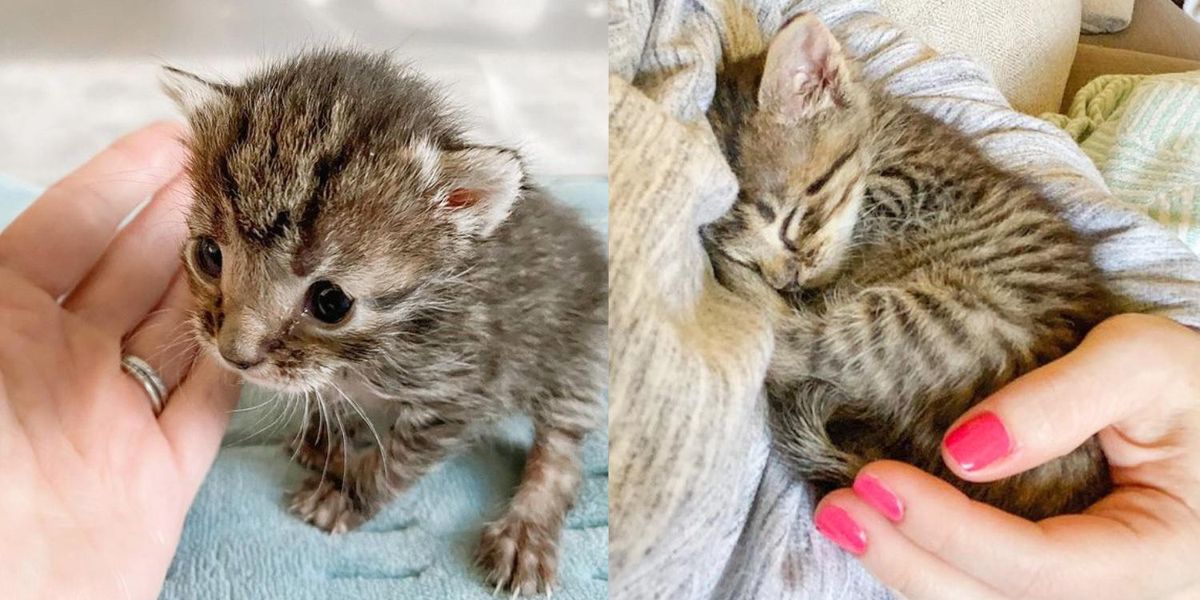 A kitten who was very small for her age, persevered into a feisty personality with so much to give. 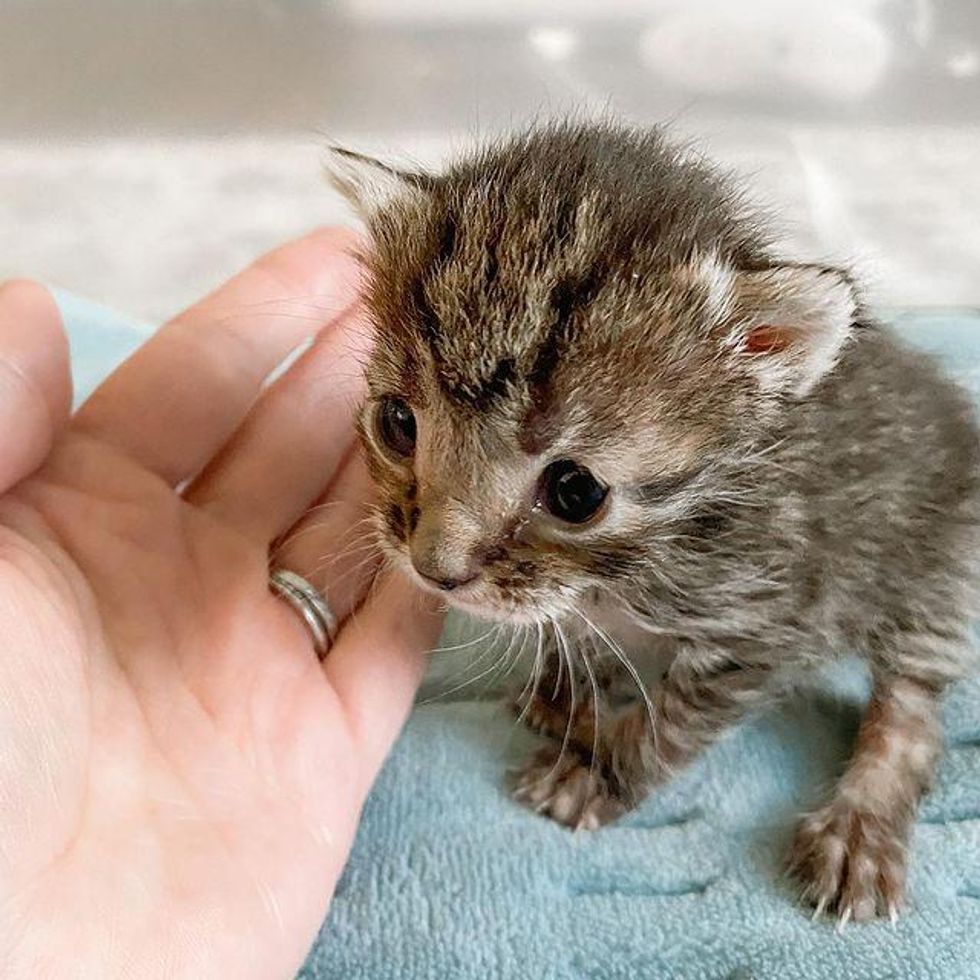 Earlier this year, a tiny kitten named Cricket was found outside and brought in to Baltimore Humane Society at just one day old. “One of the amazing vets at the shelter tube-fed her for nearly two weeks,” Melissa Lucas, a foster volunteer, shared.

When Cricket turned three and a half weeks old, she was only the size of a 1-2 day-old kitten. Despite being so small, she was determined and ate to her heart’s content at every feeding.

Cricket was a palm-sized wonder with a slight head tremor. The little tabby immediately gravitated towards Melissa when they met, and just wanted to be doted on. 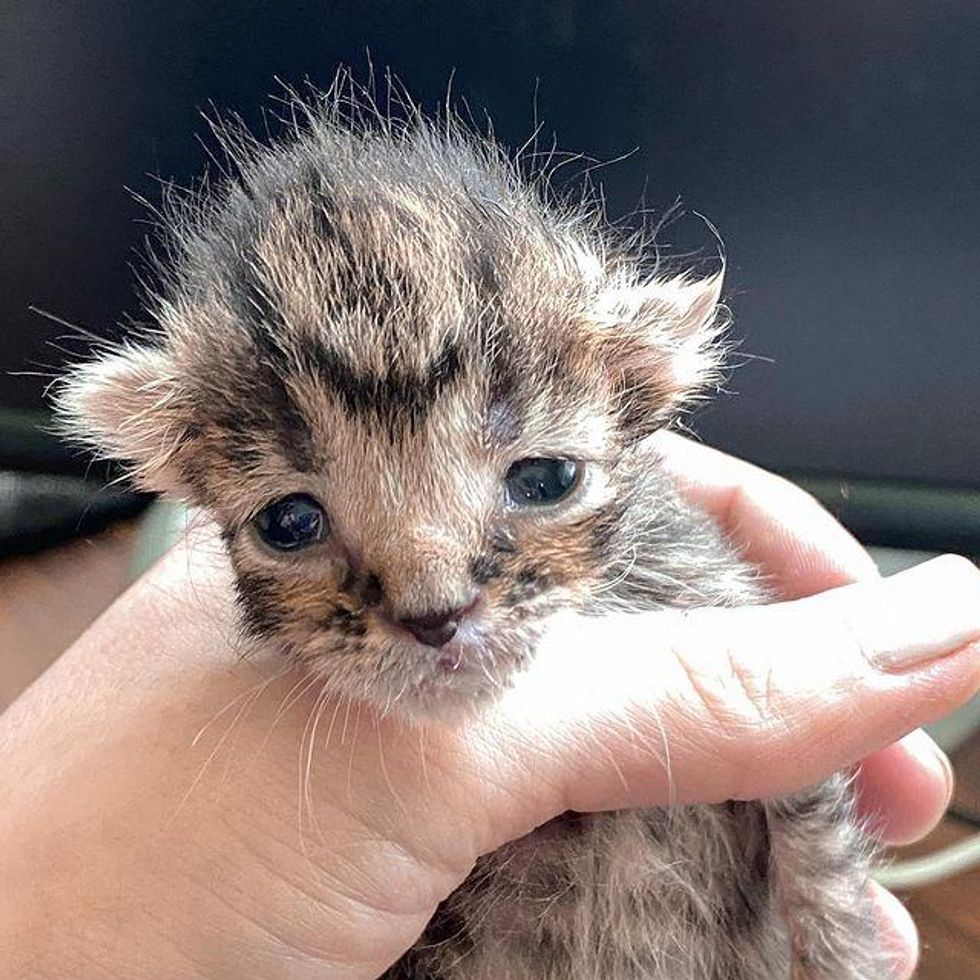 With round-the-clock care and lots of TLC, Cricket started to gain weight. After 10 days in foster care, she finally reached the size of a one-week-old kitten.

“The rate at which she was gaining was perfect. Her eyes were wide open, and she was starting to actively look for us,” Melissa added. “Although she still had that little head tremor and high-stepping gait, she got around very well and had pretty decent balance.” 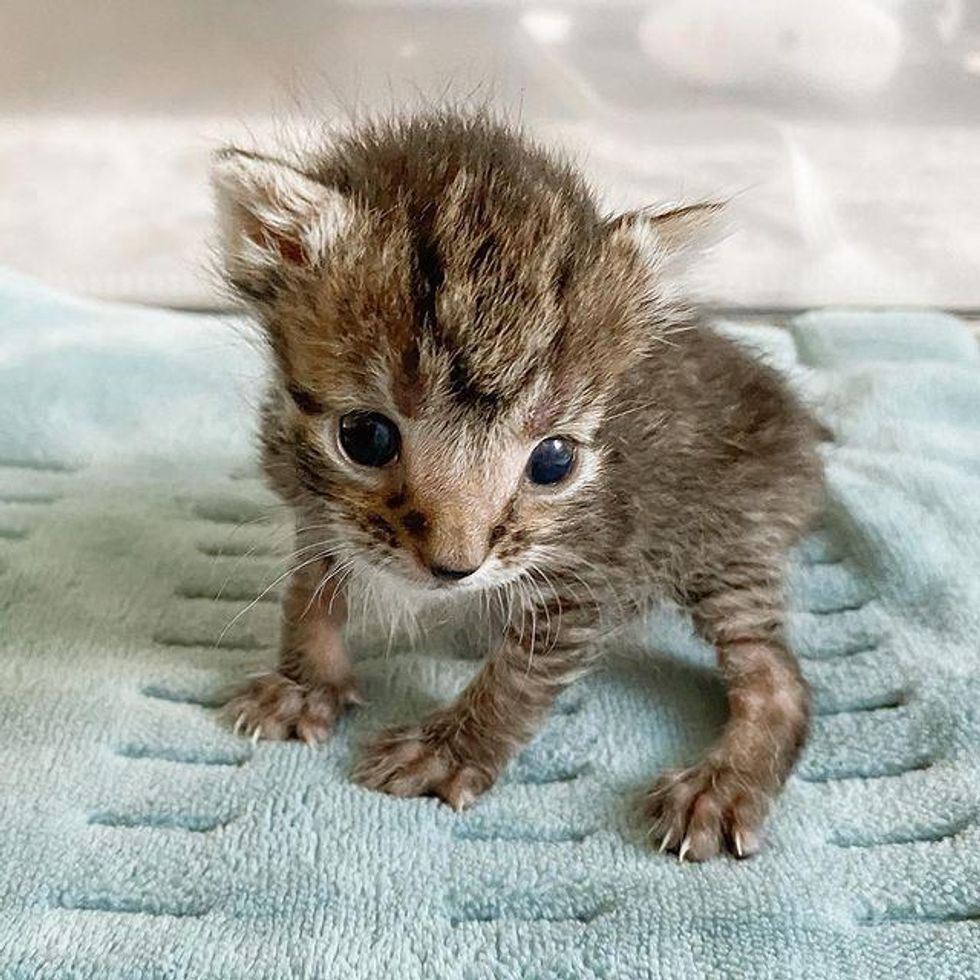 When Cricket made her debut on the couch, she was obsessed as she could snuggle with her human on demand. She would wriggle her way up under her foster mom’s chin and fall asleep purring.

“Her little personality was starting to show, and she was quite curious about everything around her.” 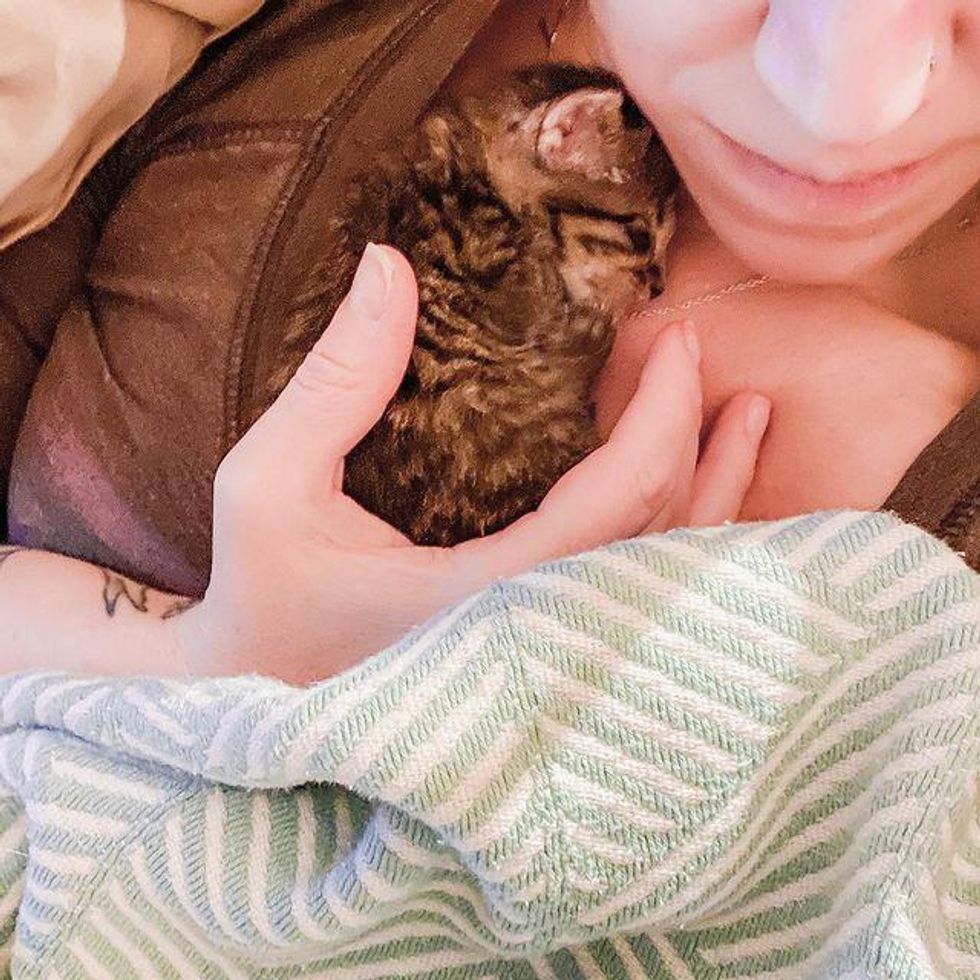 As Cricket continued to progress, her wobbliness was also improving. The little tabby who started off behind the curve in size and development, was catching up like a champ.

Cricket craved constant attention and cuddles from her people. She would press her face against their chest for an intense snuggle session and melt into them. 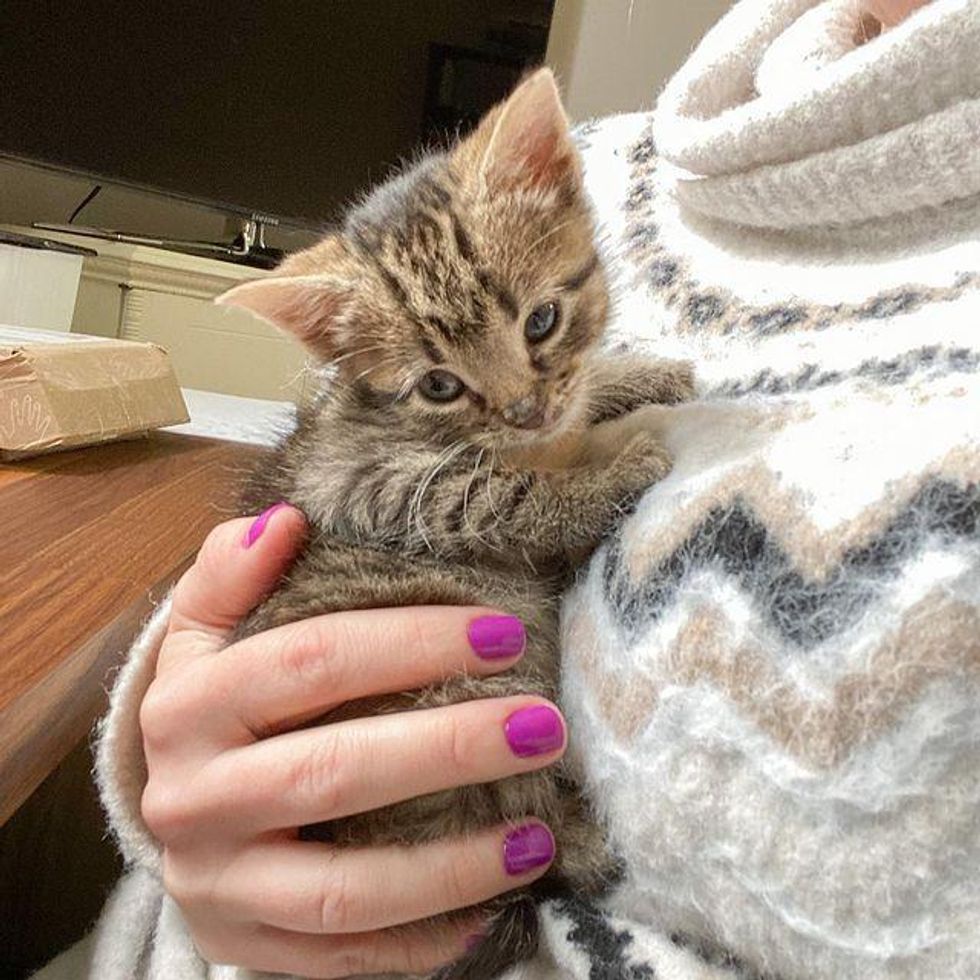 Nothing made Cricket happier than being curled up in her people’s arms.

When she finally hit a growth spurt, she gained a lot of weight and started really acting like a kitten. She was learning to eat from a dish, using her litter box like a pro, and her sassiness was coming out in full swing. 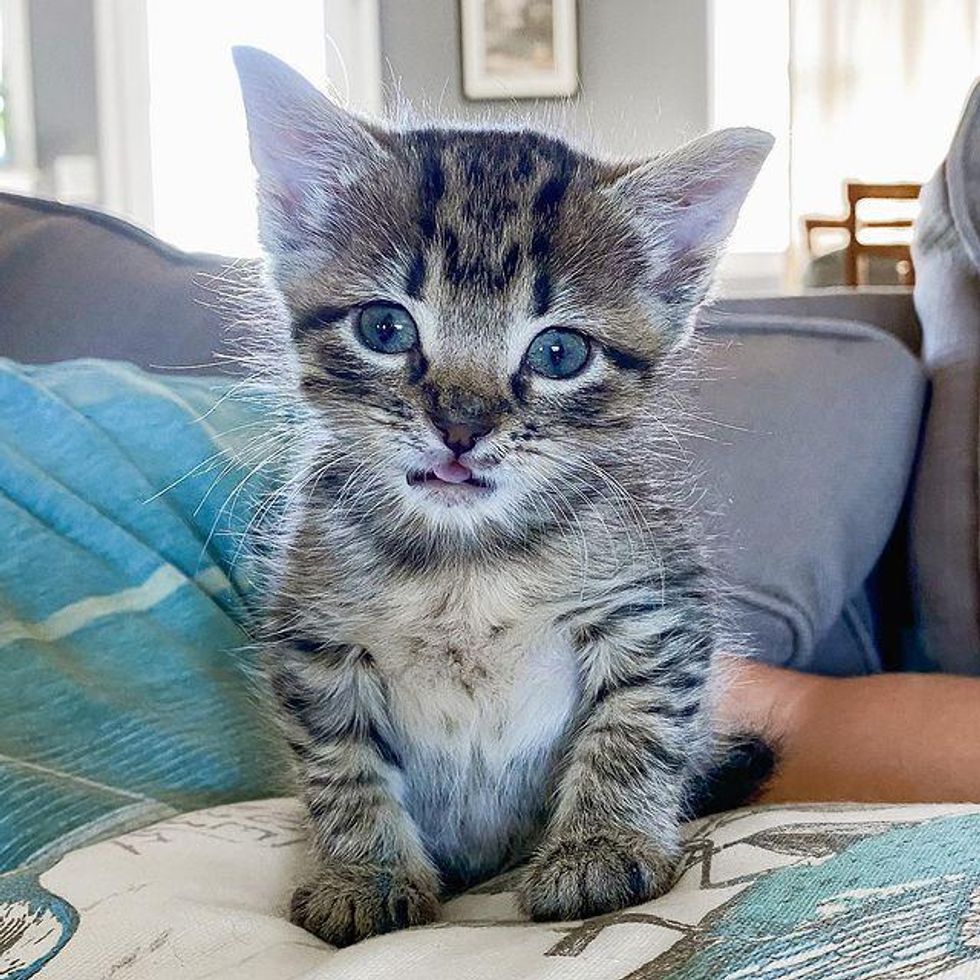 Melissa and her husband were so proud when Cricket finally figured out how to groom herself. She began to wash her face after each meal like a big kitty would.

“This little lady no longer looks like a baby squirrel or Curious George.” At ten weeks old, Cricket weighed 1.4 pounds, about as much as a 6-week-old kitten. 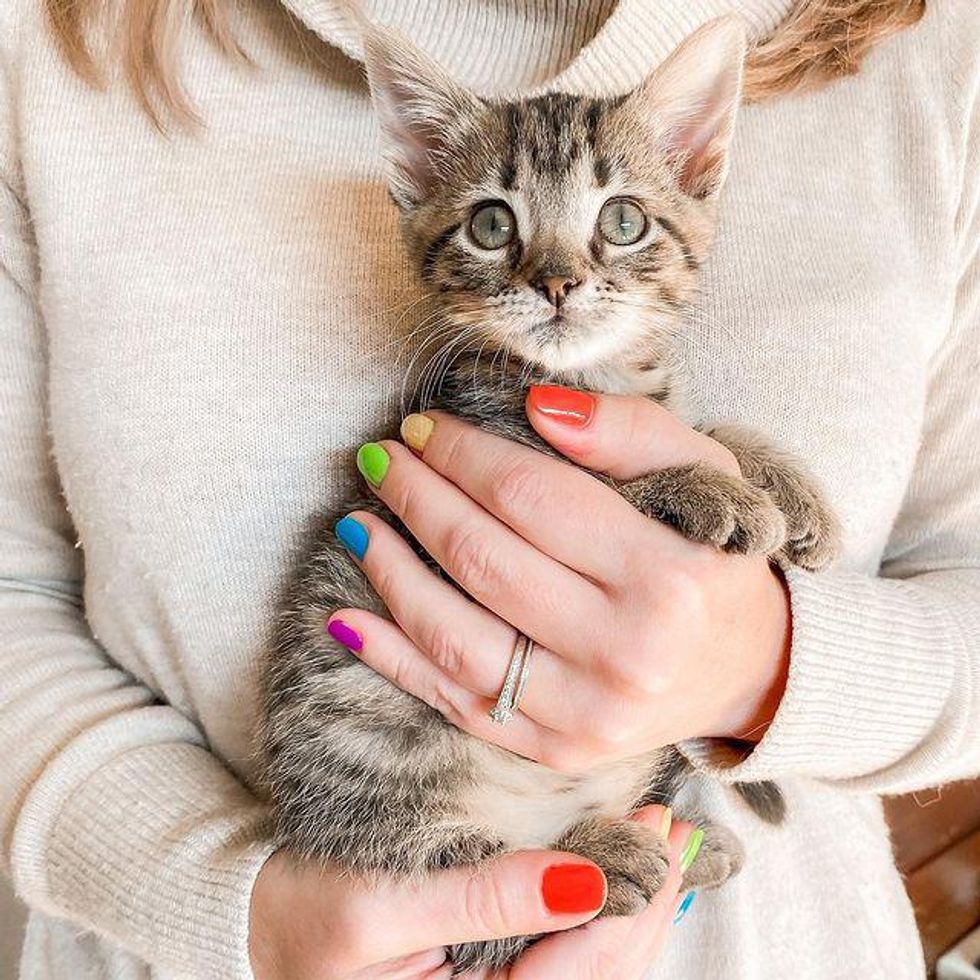 “She doesn’t let her small size stop her from doing anything. She knew what she wanted on day one, and that hasn’t changed one bit. She’s not shy about asking for it, either,” Melissa shared.

“One of my favorite things about Cricket is another trait that hasn’t changed since the day I met her – she is very chill for a kitten.” 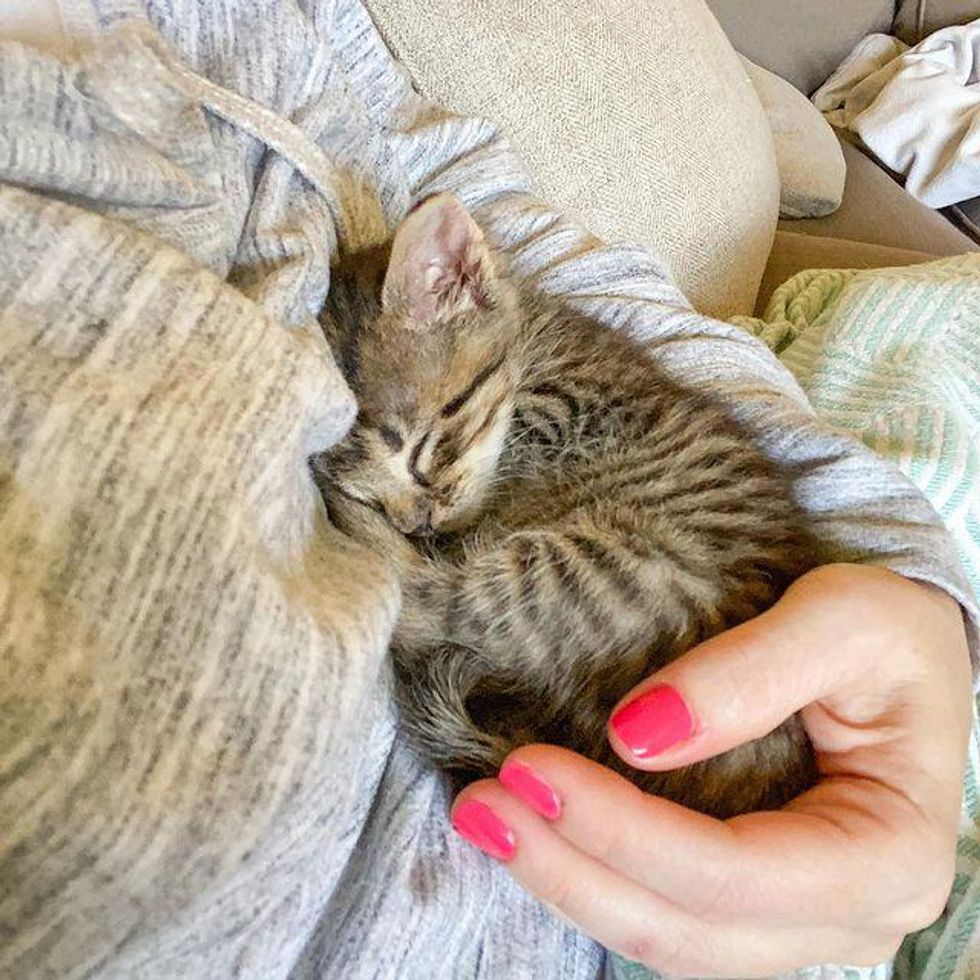 “So often she just sits there, watching and observing, taking everything in. Her favorite places to sit were my thigh, my shoulder, atop a pillow, or on the back of the couch. It was just so endearing.” 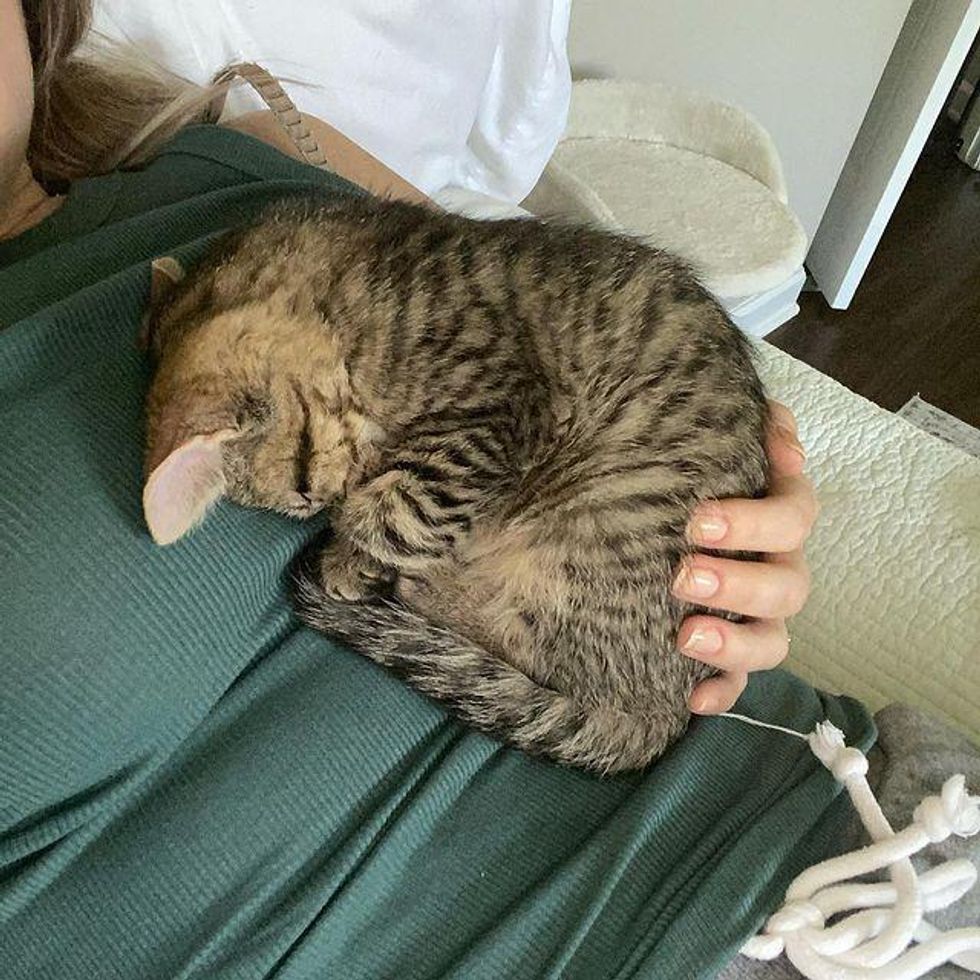 Whenever Melissa started a conversation with the tabby girl, Cricket maintained her eye contact the entire time and responded with the cutest meows.

“She is such a Mama’s girl. Anytime I sat down near her she hopped right into my lap.” 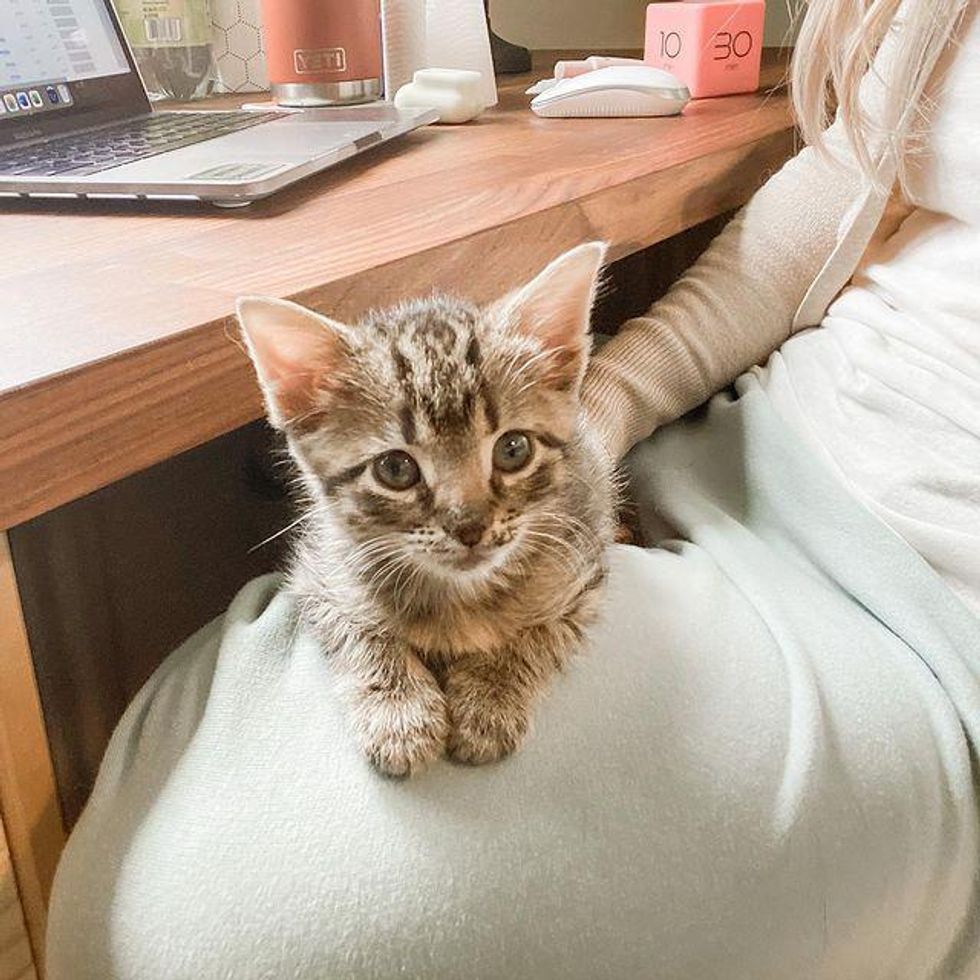 After reaching one milestone after another, Cricket was finally big enough for adoption. She was well on her way to her forever home where she would be the center of attention, and spoiled and loved. 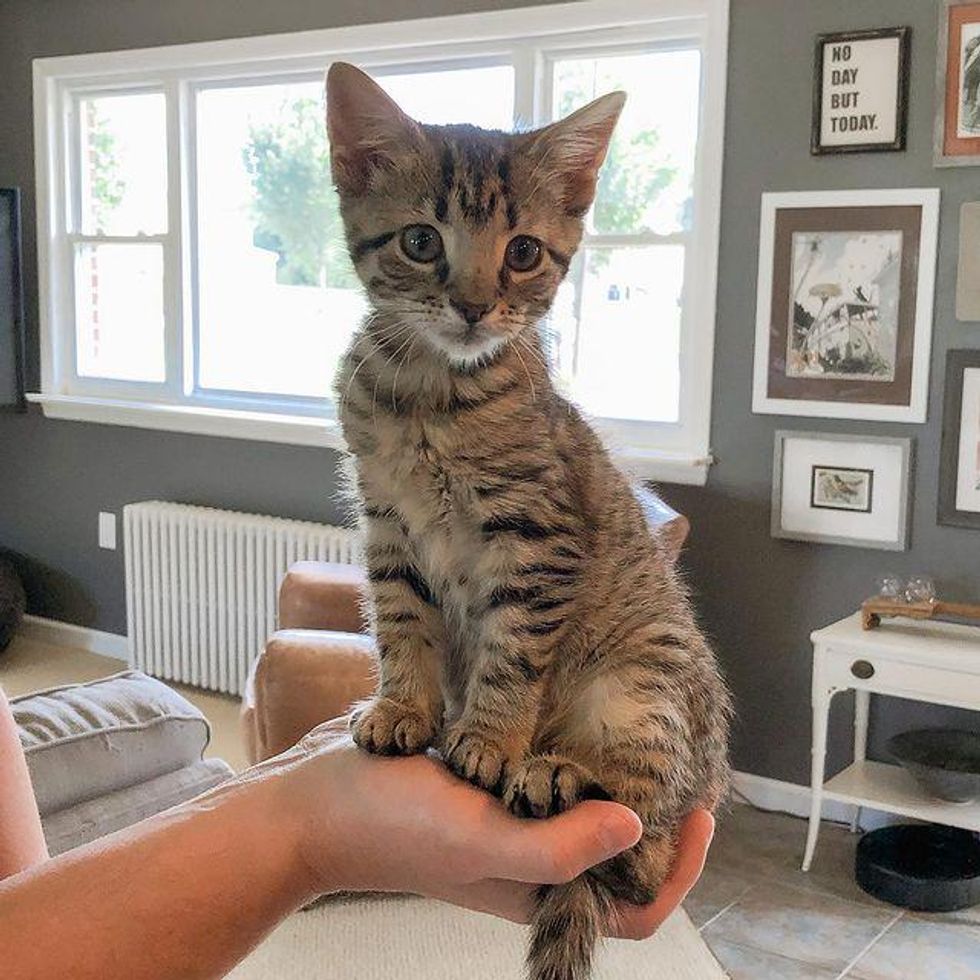 “I’m so proud of how hard she worked, all she has overcome, and what an awesome cat she has turned into. We spent eleven weeks with this feisty little bug who loves nothing more than to be scooped up and snuggled close,” Melissa wrote. 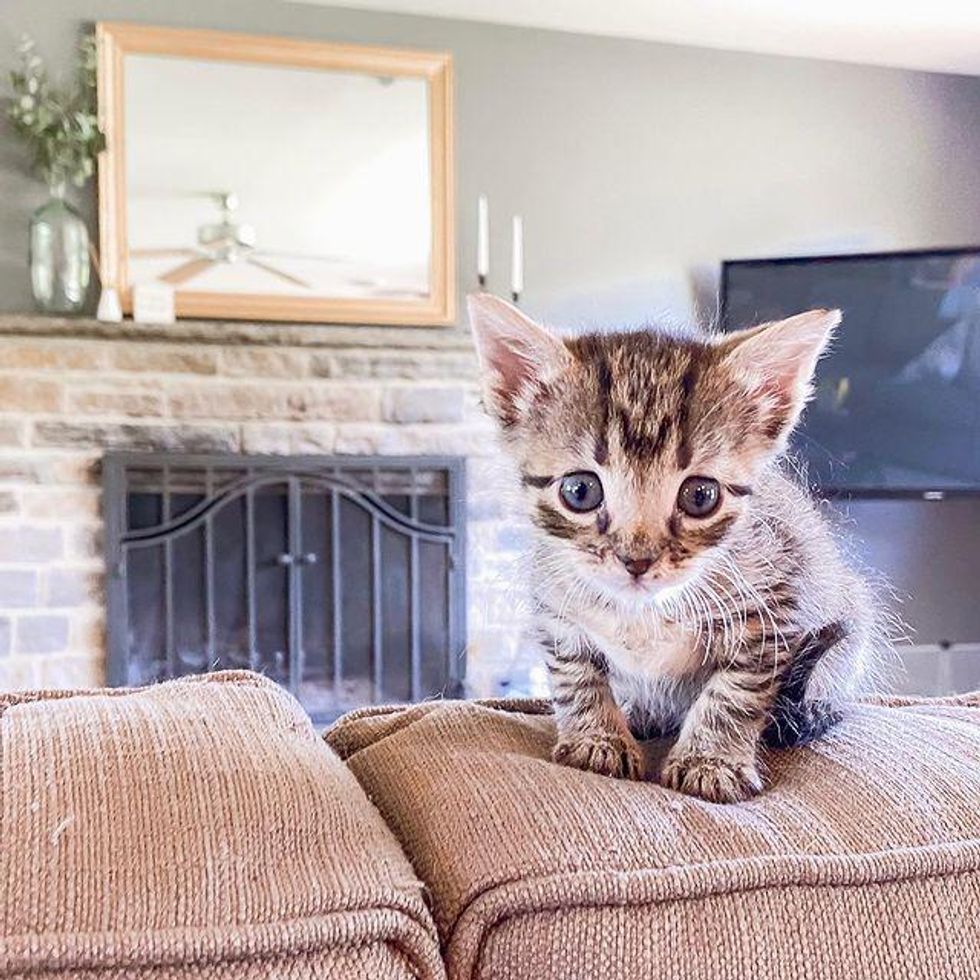 “I miss her purrs and antics, but I am so excited for her next chapter!”

Related story: Kitten with Big Bear Paws and Fearless Nature is So Excited to Run Around for the First Time

Kitten Born in Backyard Hid in a Corner, Decides He Needs Cuddles One Morning and a Place of His Own
Kitten Runs Up to Man and Jumps in His Arms When He Finds Her Under a Car, and Decides to Follow Him Around
Persian Cat care in Winter | Best Pet Products in Winter for Cat owners | Keep Kitten warm in Winter