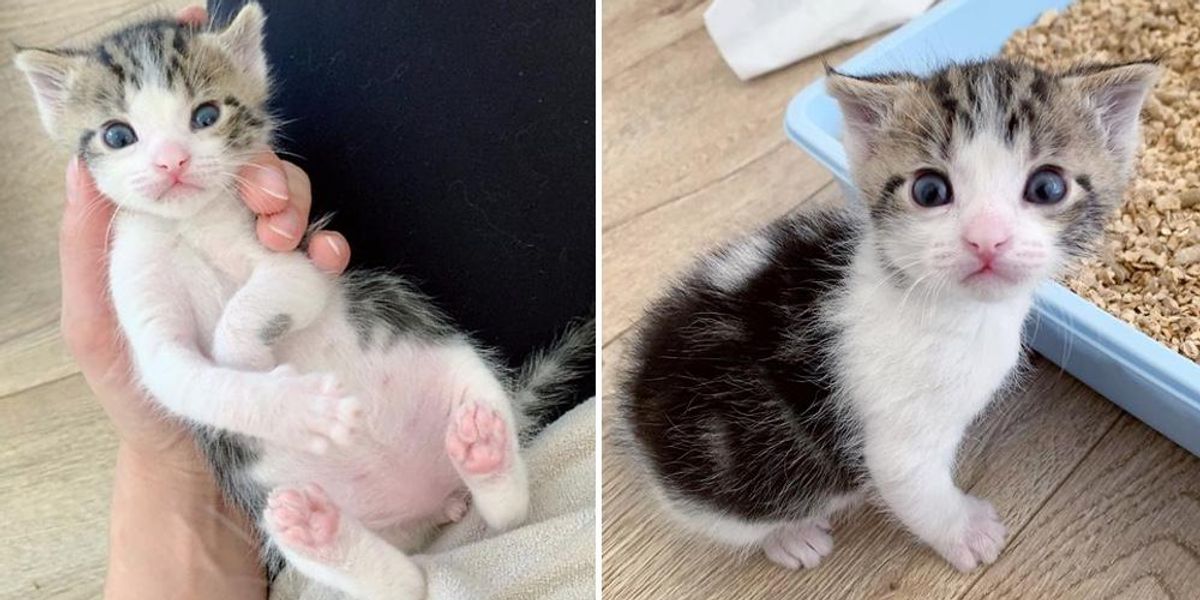 A kitten who was found less than a day old, has blossomed into a vivacious young cat with a friend he always wanted.

Two months ago, a tiny newborn kitten was found left behind in the cold. A Good Samaritan retrieved him just in time after hearing his cries.

He got the kitten inside, tried to warm him up and reached out for help. Saving One Life, an animal rescue, responded to his plea and immediately arranged a foster family equipped with an incubator.

By the time the finder got the kitten to Caroline Grace, a foster volunteer of the rescue, the kitten was in poor shape. “He was hypothermic and non responsive. Newborn kittens are just so fragile,” Caroline shared with Love Meow.

Toby after he was found as a newborn kittenCaroline @babykittensfoster

Caroline spent the next three days working around the clock to bring the little guy back from the brink. The kitten whom they named Toby, perked up after painstaking care, and latched onto his bottle with his new-found energy.

Within days, the kitten discovered his purr motor and would switch it on whenever he was with his humans. “Toby has been purring nonstop since he was five days old!”

After he got an upgrade to a comfortable playpen, he became quite the adventurous little explorer. Toby would attempt to climb his humans’ legs and check out every nook and cranny of his room.

“If he needed something (getting up or down or more bottle) he let me know by looking straight into my eyes and yelling,” Caroline said.

“He spent most of the day hanging out wherever we were in the house.”

Knowing how beneficial it would be for the little guy to have a buddy to play with, Caroline hoped to introduce him to a friend his size.

When Toby was three weeks old, Caroline was contacted about a litter of kittens found abandoned outside. They were the same age as Toby who was adamant about having company at all times.

“I agreed to take in these babies so that Toby could have some friends.”

After the two-week quarantine period, they finally had a proper meet-and-greet. Toby was a bit confused at first and didn’t know how to act around other kittens.

“He had never met other kittens before and didn’t know how to play like one,” Caroline shared with Love Meow.

“But within a day he had become one of the crew! He learned how to wrestle and couldn’t get enough of it! He loved playing and snuggling with his new friends so much.”

One of the kittens, Penny, took a liking to Toby and decided she would follow him around.

Penny the kitten when she arrived in foster careCaroline @babykittensfoster

“She immediately welcomed him and was the first friend he ever wrestled with. They became fast friends and were soon inseparable.”

The two besties have been doing everything together since. If one of them gets up to play, the other quickly follows suit. They eat, sleep and snuggle together as if they were joined at the hip.

“When Toby sees Penny snuggling up with someone, he wants to join in,” Caroline told Love Meow.

“Penny is a little more shy and scared of new things, but once she sees Toby do it first she gets more comfortable and confident.”

“Toby is the most confident and loves new sounds, people, places and things. Penny is the ultimate snuggler who would be content to be held all day and purr in your ear, while Toby is more playful and curious about the world.”

The two foster siblings make a perfect match as neither of them can stand to be alone.

“They will never have to (be alone), because they are getting adopted together! They will always have each other to play, explore and snuggle with,” Caroline added.

“They are getting adopted by the most amazing family who will love and adore them and soak up their purrs and snuggles.”

Toby has come a long way since he was rescued at less than a day old.

“He is a miracle baby with a contagious joy and love for life. To see him go from a tiny, weak and helpless newborn to the healthy, chunky, vivacious boy he is now, has been the most beautiful journey.”

Related story: Palm-sized Kitten Learns to Sit and Stand Again with Support from Cats Around Him