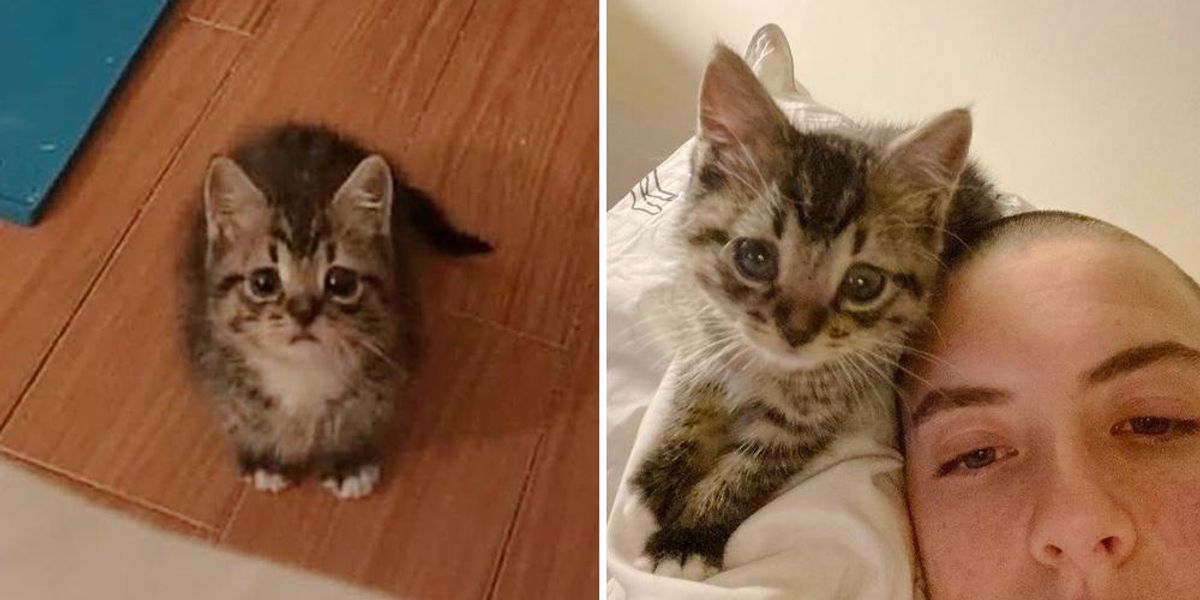 A kitten showed up at an apartment one day and made it his home. He’s grown to be quite the boss cat.

Patty the tabby kitten walked into an apartmentCaleigh Farragher

A little stray tabby found his way into the basement of an apartment building in New York. He was so brave and just walked right in. Caleigh Farragher, a resident of the building, spotted the little ball of fur all by himself.

When she called out to the kitten, the pint-sized wonder made a beeline to her and decided to tag along. “The maintenance door is usually locked, but it was open (that day), and the sweet little kitten came running to us,” Caleigh shared with Love Meow.

The tabby followed her into her apartment and was adamant about staying.

Caleigh looked around for a mother cat and other kittens but couldn’t find any. The weather was bad and she couldn’t leave the kitten out to fend for himself.

She welcomed the little guy into her home. Instantly, he became a chatter-box and was unbelievably friendly. He explored around the apartment, claiming every corner he touched, and crawled up onto Caleigh as if to say “you are my human now.”

A few days before Caleigh found the kitten, her grandmother, a life-long cat lover, sadly passed away. The tabby showed up in the right place, at the right time, and brought a lot of comfort and healing to Caleigh.

“It feels like my grandma has come back to us through the kitten,” Caleigh shared with Love Meow.

She decided to name the tabby Patty after her grandma, thinking the kitten was a girl at the time. After a trip to the vet, they discovered that Patty is a boy, but the name stuck.

The sweet kitten quickly took charge of the house like a boss. Caleigh found herself waking up to a feline alarm clock, licking her face and following her into the bathroom while she was getting ready for the day.

As Patty grew bigger, his energy soared and his personality came out in full swing. The little guy quickly figured out how to play fetch on demand.

He was constantly on the go, playing and climbing things with his unbridled energy. He was rambunctious and always on the lookout for mischief.

Watch Patty the kitty and his journey in this cute video:

“He is always jumping and running. He loves to play fetch! He’s gotten really good at it. His favorite toy is a crumpled receipt,” Caleigh told Love Meow.

The tabby has grown by leaps and bounds but he remains a loyal parrot kitty — he will hop onto Caleigh’s shoulders and supervise her morning routine.

He follows his humans around the house and never wants to miss out on the action.

Caleigh always has a little work buddy by her side when she is on the computer. Patty insists on offering a helping paw and even attempts to type on the keyboard on behalf of his human.

The tabby boy just turned one year old today. He has brought so much joy and laughter since the day he stepped paws into Caleigh’s home.

“I’m so glad we found him. He is my favorite trouble maker.”

Patty the cat then and nowCaleigh Farragher

Related story: Kitten Found Outside in the Cold Just in Time, Transforms into Sweetest Purr Machine

Ponzu The Cat Dead After Attack On Family In NYC Park
Cat Sisters Raise Each Other’s Kittens and Share an Adorable Bond
The Battle to Stop Declawing
Daily Dose Of Cute: Mama Cat Takes Good Care Of Her Baby — Chickens? [VIDEO]
Keeping Your Cat Safe In The Car