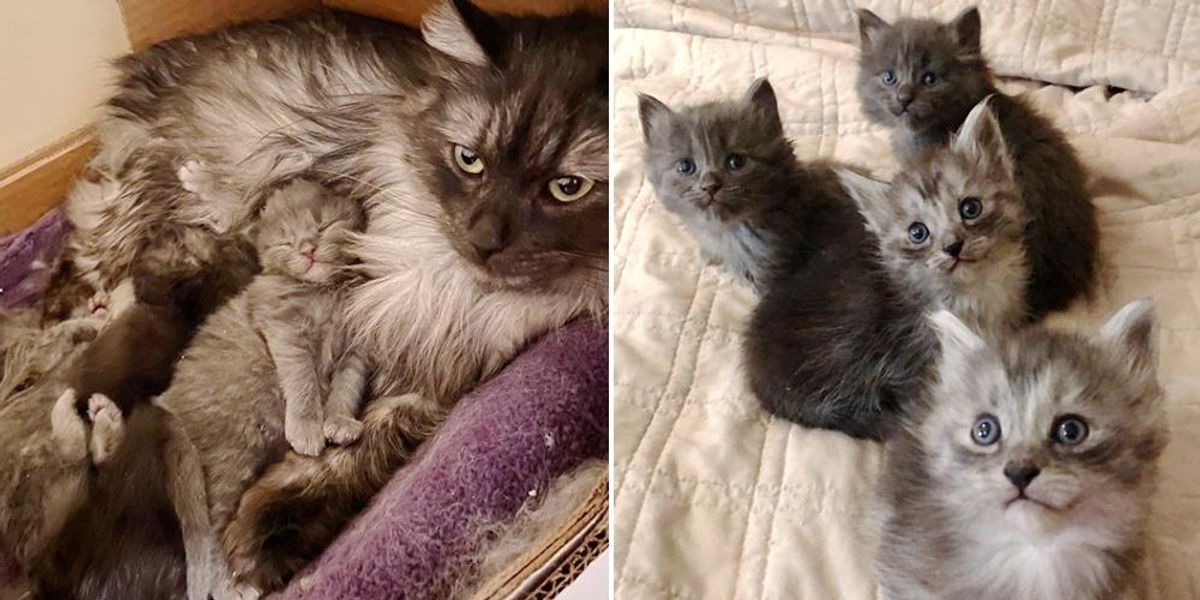 A woman drove nearly 10 hours to rescue a cat and ended up saving her precious kittens just in time.

Harmony the cat and her kittensDorset Rescue Kittens

A cat named Harmony was living on the streets of downtown Haliburton, Ontario (Canada) for her entire life, and befriended a few locals along the way. When they realized that she was pregnant, they began to try to bring her to safety.

Cailey Seymour, founder of Dorset Rescue Kittens, received several calls about the elusive cat. “A group of people tried to catch her for a few weeks with no success, so I made it my mission to rescue her,” Cailey shared with Love Meow.

She borrowed a handmade drop trap from a fellow rescue, Minden Cat Angels, and made the long trip to the location. “When I first arrived, Harmony was nowhere to be seen. We did a walk around and set up the trap just laying on the floor with food.”

The cat appeared in the alleyway for a brief moment but ran away when she saw the trap. “We probably had 15 locals walk by encouraging us as they had been trying to catch her for some time.”

After waiting for about 30 minutes but to no avail, Cailey decided to try something. “I played a video of kittens crying, placed it on the trap and within 15 seconds, she came running.”

They were able to secure the cat and transport her to a foster home. It was a long but rewarding day knowing that Harmony was finally safe. “I drove for 10 hours in one day to catch her — four hours there, four hours back with a few stops in between,” Cailey told Love Meow.

Two days later, they were met with a beautiful surprise.

Harmony gave birth to four healthy kittens (three girls and one boy) in the comfort of her foster home. The little ones were nursing up a storm with their doting mom catering to their every need. Slowly but surely, Harmony came out of her shell and warmed up to her fosterer.

“If I had gone only a few days later, she would’ve given birth outside, adding to the feral population.”

“She is very sweet despite having been placed indoors for the first time in her life.”

For the first couple of weeks, Harmony provided undivided attention and all the love she could supply to her precious four. She kept her kittens well fed and groomed, and made sure that they stayed out of trouble.

The kittens grew abundantly in weight and fluff. As soon as they figured out how to use their legs, they put them to good use and started exploring.

The feline siblings, Leanne, Brittany, Halli and Banksy, are getting more playful and mischievous as they have entered the rambunctious kitten phase.

While they are busy wrestling with each other or scampering around the room, momma Harmony is always nearby watching over them.

“We would love to see Harmony get adopted with one of her kittens. She’s been a great mother and is teaching them well. They follow her around and can often all be found cuddled together,” Cailey shared with Love Meow.

Harmony the cat and her kittensDorset Rescue Kittens

Harmony will likely always be a bit quiet and shy around new people, but deep down, she craves attention and affection.

“There isn’t a mean bone in her body and she’s going to be an incredible companion to the right person or people.”

Thanks to the timely rescue, the little family of five are thriving as indoor cats. In a few more weeks, they will be ready to look for their happily ever-afters.

“All five of these cats will be fully vetted and adopted out to the best homes, which is what they deserve.”

Related story: Stray Cat Wouldn’t Leave Her Only Kitten After They Were Found Hiding Between Sheets of Plywood

Daily Dose Of Cute: Mama Cat Takes Good Care Of Her Baby — Chickens? [VIDEO]
Kitten with So Much Sass Trills Her Way into Hearts of Family
Review: Raw Paws Compressed Catnip Balls
The Battle to Stop Declawing
Kitten Reminiscent of Woman’s Late Cat, Finds Her in a Serendipitous Way