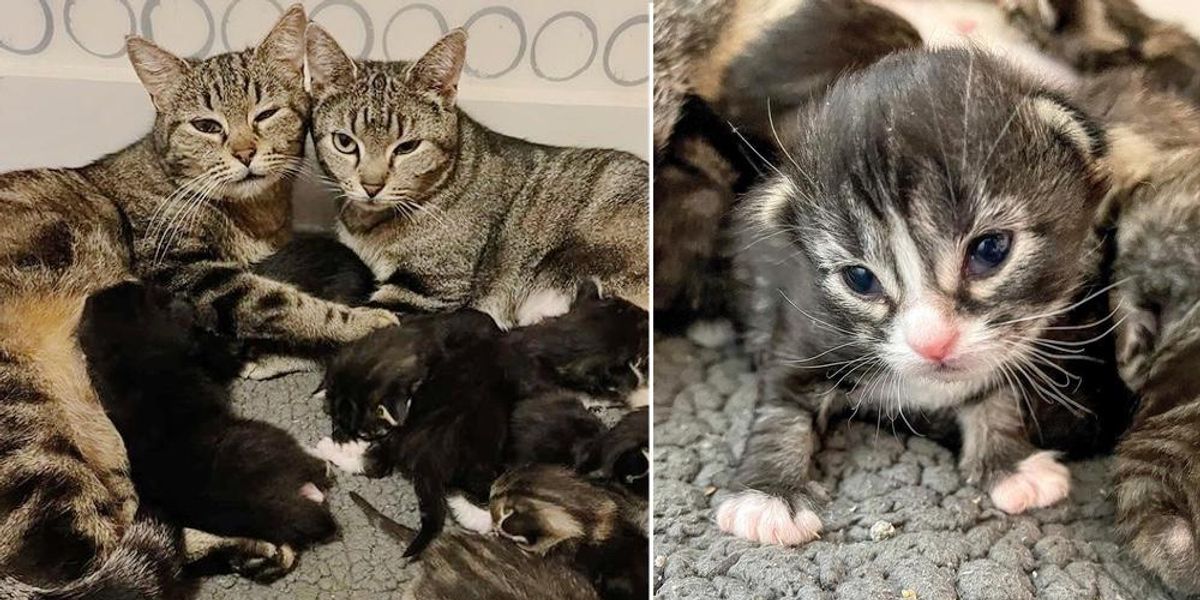 Two bonded cats who were found pregnant in the outdoors, are raising their kittens together.

Pickle and Olive, two tabby cats, were brought to Nashville Cat Rescue for a chance at a better life. They had been found in a cat colony in the Greater Nashville area, and both were expecting at the same time.

“The family that was working to assist this colony, determined that the girls were friendly and also both pregnant. When they contacted the rescue, they had one ask – that the girls stay together, even when it was time for them to be adopted,” Kiki, a foster volunteer of Nashville Cat Rescue, told Love Meow.

The tabbies were inseparable from the start. Despite being a bit shy at first, having their best friend nearby gave them a sense of comfort and helped them adjust to the new environment.

“It was clear that the girls loved each other and felt safe together. I spent as much time as I could with them, while still respecting their need for space,” Kiki shared with Love Meow.

“I wanted to ensure as babies came that they were comfortable with me assisting as needed, or just doing the simple necessities like weighing the kittens on a daily basis.”

Slowly but surely, the two feline sisters began to warm up to their foster mom. Pickle, being the more approachable of the two, started to entertain the idea of getting petted. When she realized that head scritches felt great and that her human meant good, her demeanor quickly rubbed off on Olive.

“If I was petting on Pickle, Olive would come in for some love.”

A few weeks later, Pickle went into labor and gave birth to a litter of six (where five survived). “While Pickle was doing the mommy things, Olive would try to still brush up against her in the playpen.”

Olive became Pickle’s biggest cheerleader and a pillar of strength as she constantly purred into her ears and showered her with snuggles.

“After about a week, I kept seeing Olive inside the playpen hanging out with the babies. She started to care for them like they were her own and interestingly became a little protective over them as I tried to weight them.”

A couple of days later, Kiki came into the foster room to find a tiny new face nursing amongst the others — Olive just had her first kitten.

Watch Pickle, Olive and their kittens in this cute video:


Cat best friends and their kittens

24 hours later, she gave birth to another, but the small litter size and the unusual time lapse between kittens prompted some concerns.

“I took her to the vet to ensure everything was okay. She had to go in for an emergency c-section, which ultimately saved her life.”

Both moms sadly lost one baby of their own but gained a new litter from each other. They are raising all the kittens together as a team, and the little ones are getting double the amount of motherly love.

Whenever one of the moms needs a break, the other is watching over all the babies.

“Pickle and Olive are such a joy to watch and their kittens are undeniably cute. They swap babies and care for each other’s like they were their own,” Kiki shared with Love Meow.

The kittens are now 2-3 weeks old, and have formed a tight-knit clowder. They nap in an adorable cuddle puddle embraced by their moms.

As the kittens get more active and curious, they will start exploring around their playpen. Mama Pickle and Olive are always nearby, making sure they are safe.

“Pickle has five girls and Olive has two little boys. I call them cousin sisters and cousin brothers. They are growing so much every day, and Pickle and Olive have become more and more trusting.”

Related story: Cat So Happy to Be Reunited with Her Only Kitten After She Was Brought Back from the Brink