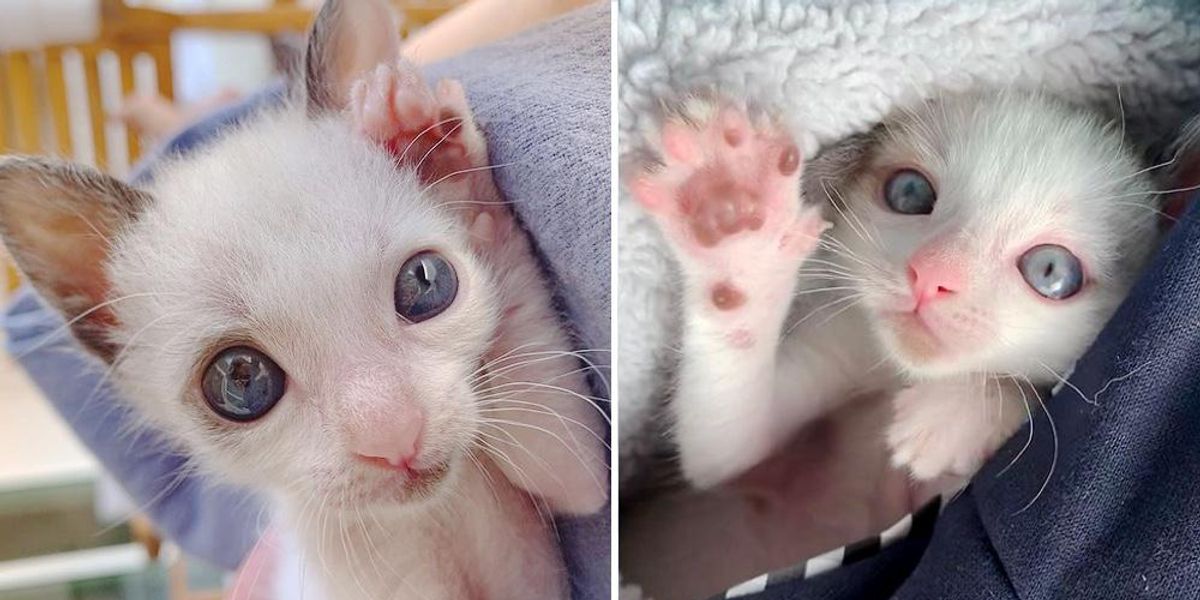 A family gave a pint-sized kitten a fighting chance and turned his life around.

Beth, a foster volunteer of Kitty Kottage, was notified about a 99-gram kitten needing help. When she saw the little ball of fur, she was surprised by how small he was.

Despite being three weeks old, the kitten was just the size of a newborn. He had been rejected by his mother due to his health, and was in desperate need of bottle feedings and someone to love.

“He was a fighter since he had survived three weeks in the condition he was in,” Beth shared with Love Meow. His eyes were crusted shut when they got him. “I didn’t know if he’d be able to see.”

The kitten whom they named Guinness, had trouble eating from a bottle or syringe, and had to be fed in drips for the first few days.

Beth and her family worked together to make sure that he had food in his belly every hour and plenty of cuddles throughout the day and night. The little one found his favorite napping spot in the crook of Beth’s neck.

With painstaking care, the kitten’s eyes cleared up and his appetite soared. He started to eat in larger quantities at each feeding and his penchant for attention also grew.

“When he figured out latching after a few days, I knew we’d make it through,” Beth told Love Meow.

Guinness had a tiny frame but a large pair of gorgeous blues. He was an avid cuddler from the start, and insisted on getting a long snuggle session with his humans after every meal.

“He was wrapped up like a little burrito. He tucked his head in and crawled out when he woke up,” Beth said. “He’s been so strong since the day I got him.”

The kitten continued to amaze his people with his strength and will to live.

At one month old, he was still half the size he should have been, but the little blue-eyed wonder ate to his heart’s content, trying his hardest to grow big and strong.

As soon as he gained some leg muscles, he didn’t hesitate to put all fours to good use. Guinness quickly figured out how to play with toys and was getting more adventurous and playful each day.

Watch the kitten and his journey in this video:

But nothing made him happier than cuddling with his humans, making tiny biscuits (kneading) on their shoulders.

He played hard but slept even harder. After getting the zoomies and wrestling with anything he could lay his paws on, he would snuggle up to his people to recharge.

Guinness was the sweetest little nap buddy and a strong purr machine.

It took the kitten a while till he finally hit a growth spurt. He was still petite but what he lacked in size, he surely made up for in personality.

“When Guinness really likes whatever is causing him to purr, he not only purrs, but he squeaks,” Beth wrote.

Guinness is a little chatterbox and isn’t shy of voicing his many opinions.

“He was checking out the view from my bedroom window, and was not pleased a vehicle had the audacity to drive by! He was quick to give them a piece of his mind.”

The sweet kitten welcomes his dad home with a bear hug, and even offers to groom his hair like a cat.

As he grew to be a teenage cat, his personality was shining through.

Guinness constantly fills the house with endless entertainment and his adorable little quirks.

It’s been almost a year since Guinness crossed paths with his forever family. He has blossomed into a beautiful young cat.

“He was only 99 grams at three weeks old when I just got him. I never would’ve imagined he’d turn out the way he is,” Beth said.

Related story: Kittens Keep Each Other Close and Comforted After Being Left Behind, and Blossom into Beautiful Cats Together